Asked in a 1997 interview about the grunts, growls and screams she’s incorporated into her singing, Yoko Ono told the sound artist Miya Masoaka that she’s reaching for “deep-rooted memory, human history… a kind of memory cell in DNA.” To scream, according to some therapeutic techniques, is to excavate what words can’t touch, uncovering the damage and oppression that our enculturated selves keep concealed. Ono’s music reveals the purposeful irresolutions of female utterance; the way anger can meld with joy and sensuality is often both tied to pain and defiant of it. “There is no line, or maybe it’s a fine line,” Ono said. Think of all the different ways that a woman can say “I’m happy” or “I’m hurting” or “I’m done.”

Kathleen Hanna, one of Ono’s most brilliant inheritors (as well as a veteran of both Bikini Kill and Le Tigre), makes that last phrase the title of a key song on The Julie Ruin‘s second album, Hit Reset. As the band raises choppy waves of sound for her to ride, Hanna calls out the voices that shame and constrain her. Her obvious subject is the plague of Internet trolling, but she’s also calling out the voices of others — so-called friends, authority figures — embedded in her head. “I’m d-o-o-o-o-o-o-o-o-o-o-o-one!” she wails in octave leaps and shattered sustained notes, her rage transforming into a source of power and fun. In the even more Ono-esque “Be Nice,” Hanna’s distorted baying, her mouth pushed up against the microphone, veers into Kenny Mellman’s slashing keyboard lines. The unnamed woman Hanna embodies here is battling presumptuous advances, spitting back men’s demands to “be nice” and take violation in stride. Playing both the dissembled survivor and the furious avenger, Hanna finds Ono’s fine line and turns it into a strangling wire.

Throughout Hit Reset, Hanna faces down the abuse she’s suffered in her own life, beginning in a youth spent with a father she feared: “Slept with the lights on, on the floor / Behind a chair that blocked the door,” she sings in low tones in the album’s opening title track. Hit Reset is by her own admission some of her most personal work, the result of insights she’s gained about how her all-too-common childhood experiences connect to both her adult struggles with chronic illness and her life as a feminist. Hit Reset takes a wide perspective on an adult woman’s decision to “be more hellbent on living than I am just surviving.” Some songs are tender; others, like “Mr. So And So,” an anti-ode to an entitled male fan, are amiably sarcastic. But the music always generates joy. The sound Hanna has developed with Mellman, bassist Kathi Wilcox, guitarist Sarah Landeau and drummer Carmine Covelli is deceptively loose, invoking girl groups, glam, hardcore punk and the party jams of Hanna’s own protégés, like her labelmates in Tacocat, while always keeping humor and truth-telling at the center.

At 47, Hanna has developed the kind of perspective that allows her to dismantle others’ unreasonable expectations. “I can play electric guitar / while shaving my legs in a moving car,” she deadpans in “Hello Trust No One,” a perfect take-down of riot-grrrl fetishism; somewhere, Sleater-Kinney‘s Carrie Brownstein is laughing. And somewhere, Yoko Ono must feel proud of Hanna, not only for her boisterous boundary-breaking, but because she also calls upon the force Ono most passionately celebrates: love. In the unvarnished ballad “Calverton,” Hanna, singing in a murmur that almost seems like an interior monologue, wonders at her own ability to remain hopeful even at her life’s lowest points. She credits her mother’s faith in her for the gift. “Without you, I’d take the fifth,” Hanna sings; it seems impossible, but she’s telling us that silence might have swallowed her. She’s battled that threat more than once in her life, but love from her mom, her bandmates and her community got her through. On Hit Reset, she triumphs at every decibel. 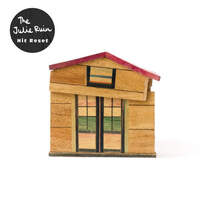